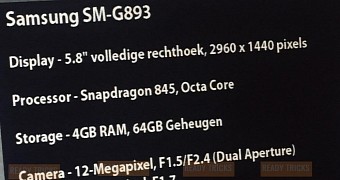 Samsung is reportedly working on a new Active version of its flagship phones, and a leak that happened a few hours ago allegedly provides us with an early glimpse into its spec sheet.

While it goes without saying that these details should be taken with a healthy dose of skepticism, they do make sense given Samsung’s approach to the Active model lineup.

For example, the leak claims the Galaxy S9 Active is codenamed SM-G893, which does seem to align with the previous generations – the S8 Active used model number SM-G892, while the S7 Active was labeled as SM-G891.

Active models typically use a battery that’s larger than on the standard Galaxy phones, and this appears to be the case with the new version as well. If this information is accurate, the Galaxy S9 Active could come with a 4,000 mAh battery, the same capacity as on the previous generation.