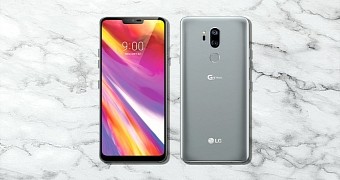 With a focus on AI (Artificial Intelligence) technologies, the LG G7 ThinQ was officially unveiled today with a notch design that users will be able to hide it if they aren’t fans of the notch. AI is apparently integrated into the camera app recognize certain subjects and automatically apply settings for optimal shots.

As rumored last month, the LG G7 ThinQ features a dedicated physical button for Google Assistant, which is tweaked to offer users up to 32 specific commands. Also integrated is a Boombox speaker with 32-bit Quad DAC support for high-quality audio, and wireless charging technologies via Quick Charge 3.0.