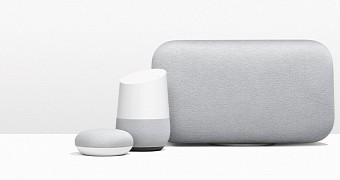 Google has patented a method that would allow people to play music on multiple devices linked to the same network.

Since most of the time our devices are connected to Wi-Fi networks, either at home or at work, it would make sense to have a way of using them as remote speakers. But syncing all the devices to play the music at once is not possible, at least not right now.

We also have to keep in mind that more and more speakers are being made, and they are slowly being integrated into our lives. We start with just one to take on the road, but we might end up with a wireless speaker in each room.

For now, Google has only patented the mesh network, which means that it’s probably a long way from being implemented. And that is if it’s ever made into a real product. Companies such as Google or Apple, have thousands of patents that they never use but hoard them in case someone else comes with the same idea.

In the case of a mesh… (read more) Asus Smartphone with 4,850 mAh Battery Spotted Ahead of Official Announcement